You're probably wondering where the name Wheatie came from so I guess I should explain that it's been my nickname since I was around ten years old.   Apparently Wheatie was quite a character at this stage of his life, and had a craving for bread at the Mexican Panadoria which he ate by the loaf.  He also liked to fish and hunt.

My official name is Kenneth M. Price, Jr.   I have been an avid amateur musician since 2002 when I arrived in Fiji. as well as being an engineer, writer and cook.  This once-in-a-lifetime trip came about as a result of my wife Peggy and myself choosing to give our two young sons a taste of the outdoors like I had gotten as a kid before they got wrapped up in a school curriculum.  We found the perfect spot in the South Pacific Fiji Islands. They had once been British Colonies but were now somewhat independent.  This meant that most of the inhabitants spoke either Fijian and English or Hindi and English.  Best of all, Fiji was much less expensive than Hawaii or Tahiti, and it was cheap to moor a boat there.

Before we all left for Fiji I had gone looking for boats in the South Sea Islands and had found one for sale there.  It was a very used Tayana 37 sailing cutter with everything on it being offered up for sale by its owner for a reasonable price.   I flew to Fiji, met Bob the owner, inspected it and purchased it.

Now we needed to sell our restaurant, house and most of our belongings before we left in three months for Fiji. We were lucky to find a buyer for the restaurant as we needed to look no further than to one of our loyal employees named Angel. She with her husband managed to scrape up enough cash to offer us a reasonable amount down such that we felt comfortable floating the rest with her in the form of a loan.

The house was easy to sell.  I stipulated that the buyer had to let me live in the house for three more months before he could take it over.  I found no trouble finding a buyer willing to do this, since about 50% of them were looking to purchase properties for rental anyway.  I just needed to offer a decent price.
So in just three months we had sold our house, the restaurant and gotten to Fiji via a flight through Hawaii. The family and I flew down together and began work on “Zeeotter” where she was waiting for us on land, having been placed there at my request in order to safely weather Fiji’s  hurricane season.  We had to repair the boom, remove the old contents, restock and repaint the bottom and topsides before we could move aboard.

After another three months traveling about Lautoka, Nadi and Vuda Point Marina, we launched her along with our plan for an extended cruise around Fiji and the South Pacific. It was late September.  We left our hotel room at the First Landing and moved aboard Zeeotter.  She was our home for four glorious years! 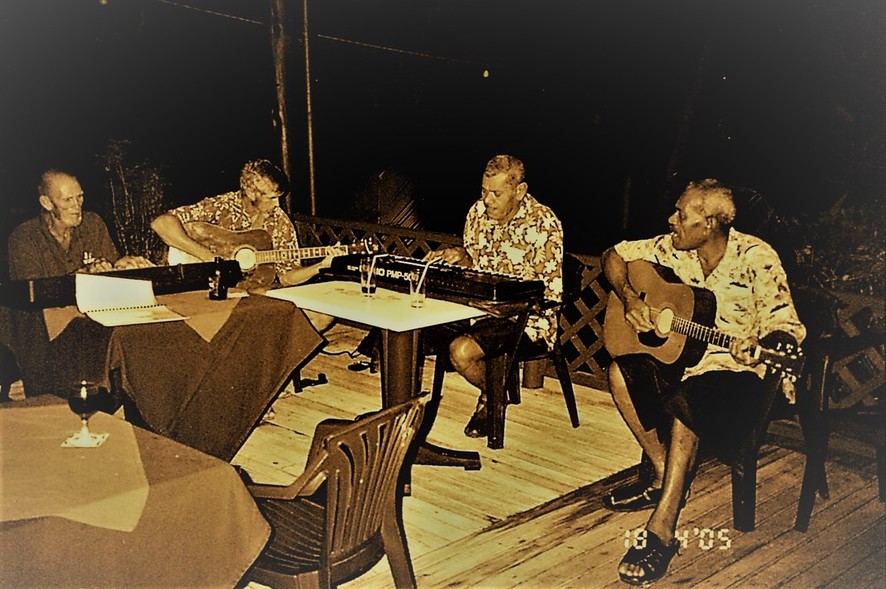 
​
One thing I should note about Fiji is that our stay at the hotel turned out to be a great experience in that we got to meet so
​many good-hearted Fijian people who worked there as cleaners, cooks, servers, bartenders and musicians.  I liked them all, especially the musicians.  It was here that I got the idea to take my guitar out of mothballs and start playing again.

​From Vuda Point Marina on the island of Viti Levu we sailed to the next largest island in the chain, Vanua Levu.  There we moored our boat near the town of Savusavu.  Within weeks of the launch I knew I was on a second honeymoon; this time with planet Earth.   We were able to catch many varieties of fish.  But it was the guitar-playing Fijian musicians at the yacht clubs in Savusavu who really caught my attention, and as it turned out, turned my world upside down.

​Now, here is the entire collection of songs in one place for your enjoyment and review.ince leaving Fiji we have resided in Washington State near the mouth of the mighty Columbia River.   We miss the tropical beaches of Fiji but feel lucky to still live within walking distance of an open shoreline. ​