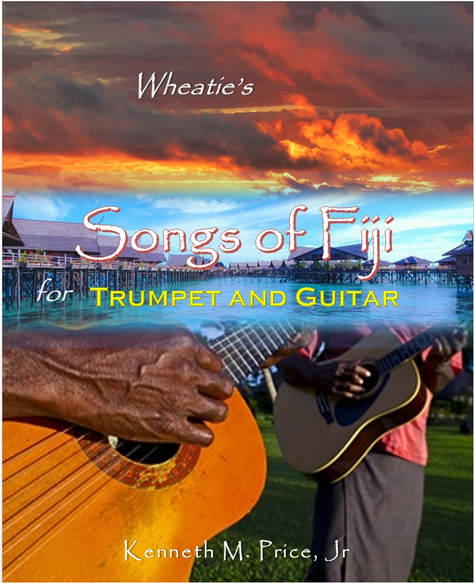 ​Welcome to this amazing collection of one-off original songs which have been 15 years in the making.   First composed during 2002 to 2006 today they represent a unique collection of songs and music from the South Pacific Islands of Fiji.   Since each of the songs is based on a real experience the accompanying music and lyrics delineate the feelings and comradeship that was shared with the Island's inhabitants.

It began when Wheatie and his wife took an open-ended trip to Fiji in June of 2002.  Wanting to take their young boys to a land where they could experience ways of the past they purchased a used Tayana 37 in Fiji to serve as their living platform.  The family down a few months later to repair and sort out gobs of existing gear.

It should be mentioned that most Fijians sing very well and many of the male singers are tenors.  This makes Fiji the land of music, and the harmonies of the traditional Fijian songs are worth traveling there to hear.   Fortunately, there are still many tribes in Fiji who continue to sing the old songs of their ancestors and the hotels feature Fijian singers who sing many of the traditional songs as well.

As a result, for nearly five years as live-a-boards, the family was able to visit remote islands using their vessel; Zeeotter.   Once they sailed inside a reef near one of the many islands they could then anchor for a few days, and it wouldn’t be long before being contacted by a Fijian resident from the nearby shoreline.  Sometimes it would be kids on a bamboo billy-billy, sometimes a fisherman would drop by in his outboard, other times someone would row out to meet them and have a talk.

Fijian people are very easy to meet; they want to meet you!!   ​And what an honor it is to meet people who actually want to listen to what you have to say!   And add to this the fact that ​Fijians are endowed with musical abilities beyond your wildest dreams, since they sing together often and have had lots of practice growing up.   It is indeed a rare and honorable treat to be able to dine and then listen to them sing their ancestral songs with their entwined voices and harmonies. 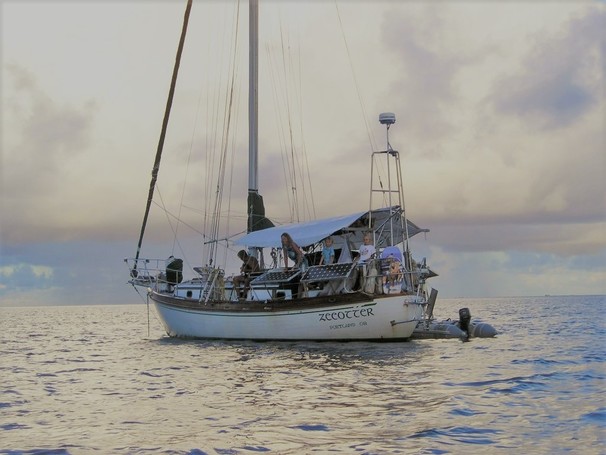 It needs to be mentioned that up until this point Wheatie would not sing as a soloist in public.  He was getting close to the age of 50, but now had stopped working to a daily schedule and worrying about money.  He was having a great time introducing his two boys to all the new Fijian friends that they were making.  And then one day while he was riding a bus into the town of Savusavu a song dropped into his head.  As it would turn out, when Wheatie attempted to play this song at the yacht club with the Fijian yacht club band, it would change his life.

Not only did it go over well, now Wheatie had his own song that nobody had heard before.  This he reasoned meant that there couldn't be any former expectations as to how it should sound.  And so for the first time he was able to sing out loud in public and put some emotion and life into his rendition.  It was a huge event for Wheatie, and afterwards he couldn’t get to sleep for most of the night since the tune would not leave his mind.   ​
The next day found Wheatie practicing the song over and over, and as he continued strumming and singing over the next few weeks, to his amazement another song “dropped” into his head.  And so again he struggled, unable to write music formally at this time, he had to devise a rudimentary way to write down some words and keep the melody before he forgot it, forever to be lost.   And onward he went;

For the next four years Wheatie strummed and sang just about every time he got an opportunity.  His nylon stringed classical guitar hung on a rope tied to the mast down inside the cabin.  Each time he or his family had another unique experience he would wake up with some poetic expression in his head in a day or two.  Some mornings found him clambering for a pen in the dim light, wanting to put down words before they faded.   Wheatie soon figured out that once he had a few lines written that it wouldn’t be long before a melody would avail that fit the words and thus a new song would be born.  This continued on such that after 4 1/2 years Wheatie had amassed nineteen unique songs.

Along the way and lucky for Wheatie he got to play with some great musicians who had made it to Fiji for good times but had few other people to play with down there.  One thing he learned from the best; they had good hearts.  The ones with the real magic had an appreciation from where their music had come from and it was they who had the most fun with their improvisations.

Before he left Fiji in 2006 Wheatie had made sure that he had recorded the songs with musicians from Fiji, being fortunate to find two brilliant Fijian musicians named Nemani and Micca to sing along with him in the town of Savusavu.   Both of them did such an exceptional job that Wheatie has yet to better the sound they produced over 10 years ago since!  You will delight in hearing their vocal harmonies and superb guitar picking.

Unable to get all of the songs recorded to the quality level desired before having to leave Fiji, Wheatie put what he had onto cd’s, then approximately 100 of them were copied, wrapped up and given to Fijian and Indian friends, pastors, teachers, moms, dads and tribal chiefs.  In addition, five copies were sent to the French Gendarmerie in Futuna to be given out to five specific individuals who had helped to free the family's boat from a grounding there.   And there were sailors that Wheatie played with who took these songs back to their home countries as well.  So who knows?  You may run into somebody playing one of them someday!
​